I never cease to be amazed at how often our perceptions end up getting in the way.

These perceptions are virtual “extensions” of what our sensory channels perceive and what our minds and bodies, think and feel for us in real life.

And they can impact massively on the conclusions we draw about people, events and the world around us.

Let me illustrate the point with a story which is an adaptation of the famous poem by American poet John Godfrey Saxe (1816 – 1887) The Blind Men and the Elephant.

A great travelling circus arrived at the outskirts of a town in which all the inhabitants were blind. Many of the citizens came to greet the travellers and also to find out what their business was for no circus had ever passed that way before.

There was great curiosity and cries of wonder as the sightless people feasted on sounds and smells they had never experienced before. Of particular fascination was a huge elephant, an animal previously unknown in that part of the world.

A delegation of elders was sent to find out more about what the elephant actually was. And as none of them had any concept about what an elephant could be in size, shape, or form they groped different parts of the elephant blindly in order to know it better.

When these elders returned to the eager and curious throng of their fellows and neighbours they each had their story to tell.

The first, whose hand had explored the tail said, ‘It is long and thin and smooth and tough like a great python.’

The second, whose hand had explored a leg said, ‘It is massive and thick like the pillar of a temple.’

The third, whose hand had explored the trunk said, ‘It is long, heavy and rough to the touch like a great water pipe.’

A fourth, whose hand had explored the ear said, ‘It is broad and soft, and smooth like an expensive carpet from Kashmir.’

And a fifth, whose had had explored a tusk said, ‘It is pointed and hard and curved like a mighty scimitar, a dangerous weapon indeed.’

Each man had explored one part of the beast, and none had a sense of the whole. They each made assumptions based on a partial knowledge of the available information. Each quickly jumped to their own conclusions and passed these on to the others as if they were the whole truth. Thus it was that when the circus left town, nobody had any real sense of the elephant at all.

Action point:
Reality is often all about OUR perceptions of reality. This is why two people can be exposed to the same event but will have completely different accounts when later asked to recall the experience. (Police detectives are nearly always suspicious of interview accounts that are exactly the same – it suggests collusion has taken place amongst witnesses and merits further investigation).

How does this affect YOU? Ask yourself these questions:
How often do you find yourself making made assumptions based on a partial knowledge (based on perceptions) of the available information?
Do you ever jump to your own conclusions and pass these on to the others as if they were the whole truth?
What’s the impact?
And to what degree is your behaviour helpful and resourceful?
Knowing the answer to these questions what will you do differently now? 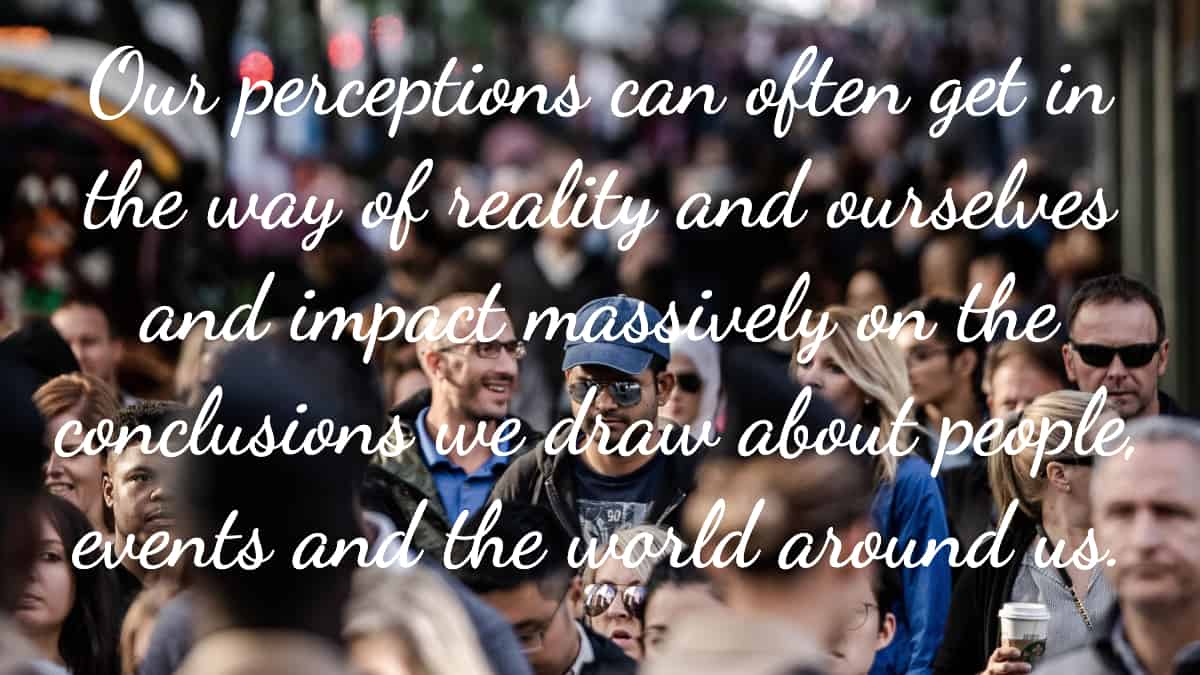