Ben worried people were out to get him, so when he was called into a meeting with his boss, he knew it was bad news…

…or was it bad news?

Ben was very nervous, and he wondered what it could possibly be about.

His boss, Jerry, sat down behind the desk and gestured for Ben to sit in the chair across from him.

“Ben, how long have you worked here?” he asked, tapping his pen against the desk.

“That sounds about right. Ben, I spoke with Ruth last week, and I’ve been meaning to talk to you about something.”

Ruth was his supervisor. She must’ve told Jerry something bad about him. What had he done wrong? He wracked his brain, but couldn’t remember anything. People were always out to get him, Ben thought.

“Listen Jerry,” Ben said, panicking. “I don’t think Ruth really tells it like it is. She plays favourites with the employees and doesn’t treat us fairly.”

“That’s too bad because she recommended that I give you a pay rise. I’m glad you said something, though. I’ll have to look into it.”

MORAL: Control your reactions, or you may find yourself acting unwisely in haste.

Oops! Ben must be kicking himself now.

Ask yourself: How many words have I blurted out in a rush, only to wish I could take them back later? As the saying goes, speak in haste, regret at your leisure.

Self-discipline is the key to success in many areas of our life. Controlling our tongue is one of the most important aspects of self-control that we can master. The tongue is an excellent servant but a cruel master, as Ben found to his dismay.

When we control our gut reactions and take the time to think instead of blurting out our first thoughts, we are guaranteed to be happier with the results.

Ben made the mistake that is so common to all of us – he jumped to conclusions. He made a decision about what was happening before listening, and he acted on his thoughts, feelings, and fears.

The wiser course of action would’ve been to listen closely, absorb the situation, think about it, and then give a response.

If Ben had the attitude of learning from instruction, he would have noticed that Ruth and his Jerry were happy with his job performance.

Instead, he taught Jerry that he’s a gossip and a person so concerned about his own aggrandisement that he is willing to put someone else down in order to preserve his own reputation.

Even when someone corrects us, if we hold our tongue and listen to constructive criticism, we can develop and grow in ways we hadn’t considered.

Self-discipline in controlling emotions saves us embarrassment and will prevent the need for apologies in the future.

Self-Reflection Questions:
Do you often find yourself wishing you could take back something you’ve said?
How could disciplining your tongue help you in your relationships with others?
Is your reluctance to think before speaking holding you back in your job or personal relationships?

Can you do this? I’m sure you can. 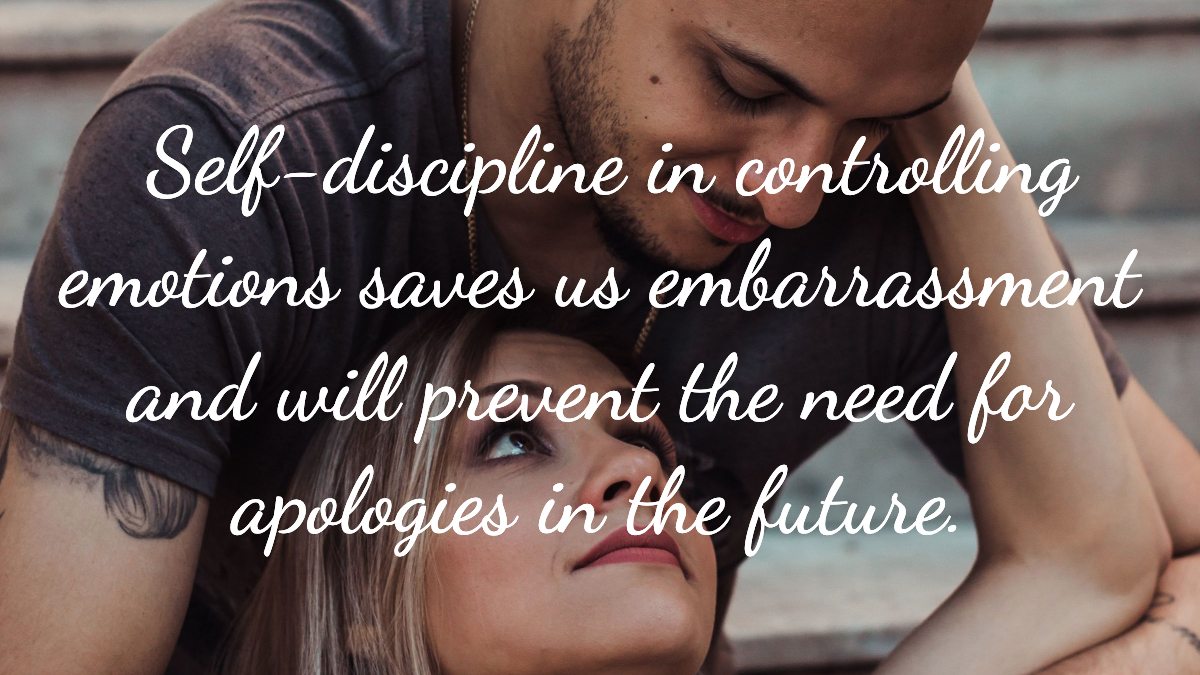