I get a sense of achievement and accomplishment from completing them. It helps me relax and keeps the old brain cells on their toes at the same time.

For those of you who don’t know, a Sudoku puzzle is defined as a logic-based, number-placement puzzle. Anyway, when I first started it took me some time to figure out how to do the puzzle. I got better and better and advanced on to the harder puzzles.

That’s when I hit a wall. The puzzles seem to defy logic and it started to take me ages to progress. Quite often I gave up. I just couldn’t see where the next number fitted in. I’d be making mistakes and have to throw the puzzle away as it was illegible with squiggles of ink everywhere and numbers crossed out. I’d sometimes get frustrated and angry over my failures with the puzzles.

Then one day my daughter bought me a lovely biro that had a special ink that could be erased. I’d been struggling with a brute of a puzzle at the time. A new approach was required. I thought to myself let me use a logical guess as to what the numbers might be for a line that’s nearly complete. If it’s wrong I can easily rub out the numbers with my new pen and start again.

To my surprise, I was able to progress the puzzle and complete it in quick time. And even if the guess proved wrong, I learned from the experience and was able to make changes and continue solving puzzles, even the really difficult ones.

What’s this got to do with you being the very best version of yourself? Well, it’s a simple example of what happens when you start to embrace the risk of failure.

You see, what you’re really doing is giving yourself more opportunities to succeed. It doesn’t matter what you’re striving to accomplish. Indeed, embracing failure will help you succeed in all areas of your life.

Start Small
The easiest way to embrace risk, and potential failure, is to start small. Learn to say ‘yes’ to small things in your life, even if there’s a chance you’ll mess up or don’t get the results you would like. Say ‘yes’ to a coffee date, say ‘yes’ to starting a new project at work, say ‘yes’ to using a new method of gaining customers.

Start small and you don’t have a lot to risk. If it fails, it’s not a big deal. But, if it works out, it gives you the encouragement you need to keep going and give something else a go.

Get In The Habit Of Taking Risks And Trying New Things
Starting small also allows you to get into a habit of taking risks and giving a go new things. And that’s GREAT! Make an effort to say ‘yes’ more often and make it a new habit. It’s not easy, especially if you’re a cautious person who likes to weigh-up the pros and cons and only commit to something new once you know you can do it. Breaking out of that habit is challenging, but you can do it by making an effort to say ‘yes’ and take those risks on a regular basis.

As you start to embrace risk and fail more often, you’ll also learn that failing isn’t the end of the world. In fact, it isn’t even a bad thing. If nothing else, failing means you’re giving it a go and sooner or later you will succeed.

Focus On What You’re Learning
Not only that but with each failure, there’s a lesson to be learned. By embracing failure, and paying attention to that lesson you’ll get good at whatever you’ve set out to do and you’ll do it fast. The faster you fail, the faster you’ll learn, and thus the faster you’ll succeed. Start embracing those failures, take those risks and reach your goals in record time.

What I want you to take away from reading this story is that it’s not really about messing up or failing when you give new things a go and they don’t work out. Instead, it’s about the opportunities you’re exploring. The more you risk failing, the more opportunities you’re saying yes to. And that is actually a very good thing. So, #OWNIT!

Here’s to your success! 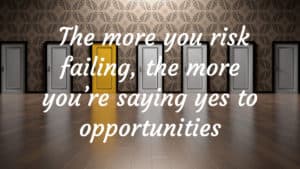